The crane is a majestic bird, long and graceful in flight and often featured in Asian paintings. Early in Sarana’s Gift we learn that Sarah created a rainbow curtain of a thousand folded, origami cranes and later that her piece of art was titled “Peace Comes in All Colors."

The connection between cranes and peace is a common one, enhanced by the story of a young girl injured by the nuclear bomb that was dropped on Japan.

A Thousand Cranes: As the story goes, during WWII,  Sadako Sasaki, a young victim of the atomic bomb in Hiroshima, was diagnosed with leukemia from exposure to radiation.  There are many versions of her story; one says she decided to fold 1,000 paper cranes as a symbol of peace and hope but was only able to fold 644 before she died of her injuries.  Another says her friend folded the cranes for her in hopes of her recovery.  Regardless of who folded the cranes, today people of Japanese ancestry as well as many others, carry on the tradition of folding 1,000 cranes in hopes of health, happiness, and peace.  There is a memorial statue of Sadako at the Hiroshima Peace Memorial Park with her holding a single crane.  My maternal grandmother is from Hiroshima and we still have relatives there today.  They were fortunate and were not harmed by the bomb. 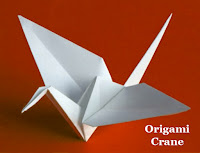 Some Native American Tribes associate the Crane with good luck, peacemaking, leadership and speaking skills while the Chinese consider the crane a symbol of longevity and auspiciousness and folktales from many culture have the crane delivering babies.

How long do you think it took Sarah to fold one thousand origami cranes? Do you like origami? (Please leave your thoughts in the Comments section below.)

There is a legend that says if you fold a thousand cranes, you will get your wish. If you want to fold an origami crane, here’s a video on how to do it.
Posted by Joyce Wycoff at 6:00 AM

"The deeper the pain, the greater the fear,
the wider the door opens to a new world.
Step through." -- Sarana's Gift, Epilogue